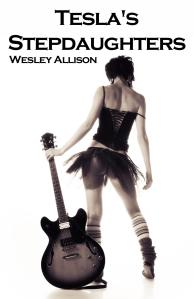 Here is the new cover for Tesla’s Stepdaughters.  It should be gracing the ebooks within a few weeks and the paperbacks shortly thereafter.

I actually purchased the art for this cover some time ago, originally for use on the cover of a sequel.  I have a couple of chapters of it written and may well get back to it in the future, but decided, as part of my generally sprucing up of my books, that I would go ahead and use it.  I can always find new art if and when I get the second book finished.

If you haven’t read Tesla’s Stepdaughers, it is a rock and roll, steampunk, detective story.

In an alternate 1975, where men are almost extinct due to germ warfare, someone is trying to kill history’s greatest rock & roll band.  It falls to Science Police Agent John Andrews, only recently arrived from the distant male enclaves, to protect them.   As the band continues their come-back tour across North America, Andrews must negotiate a complicated relationship with Ep!phanee, the band’s lead singer; drummer Ruth De Molay, bassist Steffie Sin, and the redheaded clone lead guitarist Penny Dreadful, as he protects them and tries to discover who wants to kill the Ladybugs.