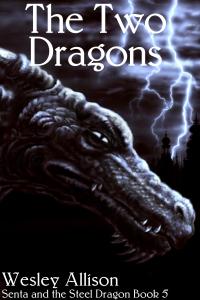 Edin Buttermore was a character I created for The Drache Girl.  I always had in mind that he would be a big part of the plot at some point.  While he has a few memorable scenes in The Young Sorceress, he doesn’t really have that much to do until The Two Dragons.  Here he explores the dragon fortress with Senta and Staff.

In the daylight it was plain that Brown had been bitten on the face by a spider, but he seemed to have no other wounds. Ivo Kane produced a tiny clear bottle of detoxicant, pouring it down the man’s throat, while his wife taped a plaster over the injury. They had between them already seen to Mr. Vever’s pains. His left arm was splinted and his right hand was bandaged.

“Here comes Staff,” said Werthimer, pointing to the back of the fortress courtyard.

Staff was indeed coming, followed by Buttermore, Wissinger, and Manring. When they reached the eight party members, the former naval officer looked at Bratihn questioningly. Later, Senta couldn’t remember exactly what Bratihn had said, but he seemed to sum up every detail of their adventures in remarkably few words. Croffut added one or two details. Staff nodded as if he had expected nothing less.

“And how did it go with you?” asked Kane.

“We made it to the top of the tower,” said Staff. “No problem, though we had to chase off a few pterosaurs.”

“It was a magnificent view,” said Buttermore. “I think I captured it.”

“It took us a while to set up Mr. Buttermore’s camera equipment,” said Wissinger. “Not that I’m criticizing.”

“We found treasure too,” said Buttermore.

“Really? Treasure?” Mr. Vever climbed unsteadily to his feet, accidentally kicking Brown in the head as he did so.

Staff set his rucksack down and opened it, withdrawing what appeared to be a very ornate necklace. It was made of copper and the metal was so green with corrosion that it had almost dissolved away. Clearly visible though were a number of large red gems.

“By Kafira, those are rubies,” said Ivo Kane.

“I think that copper is a loss,” said Vever. “But I could set those gems in gold settings and they would be fit for Prince Tybalt himself.”

“My plan is that when we return to Port Dechantagne you should do just that, Mr. Vever,” said Staff. “I count fifteen rubies. Maybe matching rings for all of us? I think we’ve earned it. And I imagine a set of earrings for the governor.”