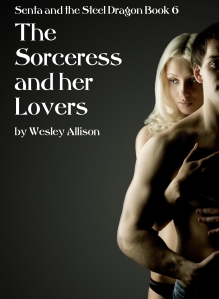 It’s been three years since the Kingdom of Greater Brechalon, with the help of Zurfina the Magnificent, defeated their hereditary enemies, the Freedonians. The world has changed. Port Dechantagne, once a distant outpost of civilization, has grown to be a large city, the center of prosperous Birmisia Colony. Steam-powered carriages share the streets with triceratops-pulled trolleys, fine ladies in their most fashionable bustle dresses lead their lizardmen servants through the shopping districts, and an endless stream of immigrants pours into the region.

The young ladies of the colony are busy with fashion, coming out parties, and securing partners among the smaller male population. Eleven-year-old Iolana Staff, daughter of the colonial governor, has more important things on her mind—the mysterious machine known as the Result Mechanism, and her relationship to the machine’s creator.

Meanwhile, sorceress Senta Bly returns from the continent with a new male companion, an illegitimate daughter, and a long lost brother. Hated and feared for her magic, she must face wizards, assassins, and an old enemy from another reality.

The Sorceress and her Lovers continues the story of Senta and the Steel Dragon, taking up where The Two Dragons left off. It is a story of magic and power, fear and revenge, and love.

Purchase your ebook of The Sorceress and her Lovers at Smashwords.