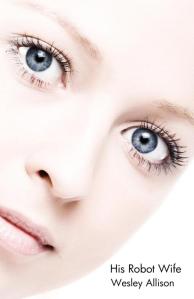 Patience made dinner for Mike that evening, but he didn’t really feel like eating. Eventually he made his way upstairs and climbed into bed, not even bothering to take off his clothes. He didn’t really notice whether Patience joined him at any time during the night. But in the morning, she brought him breakfast in bed—oatmeal filled with raisins and nuts, a hardboiled egg, and a cup of tea. As she looked at him, she made a “tsk tsk” sound.

While he ate, Mike turned on the vueTee on the wall and flipped to the feed for the local news. An image over the newscaster’s shoulder appeared of Hot Dog Paradise.

“The violence related to Proposition 22 reached even to the sleepy town of Springdale, where a beloved teacher was beaten in the parking lot of this local restaurant by proponents of the anti-robot marriage proposal. Two alleged attackers have been arrested in the incident.”

“I gave them something to remember me by,” Mike told the vueTee.

“Of course you did, dear,” said Patience, passing through the room.

Making his way to the bathroom, Mike got a good look at his face in the mirror as he shaved. The entire right side of his head was swollen and an angry purple, while the left side was a sickly yellow. After shaving and brushing his teeth, he took a shower and then got dressed in gym shorts and a t-shirt. As he pulled a pair of socks from the dresser drawer, he spotted the tiny u7 plug sitting right there between the socks and the underwear, where he had put it upon returning home Thursday. Sticking it in his shorts pocket, he pulled on his socks followed by his shoes and then went slowly downstairs. He found that even taking the steps too quickly gave him a headache.

Patience was in the kitchen, cleaning the stovetop, though it didn’t look as though it actually needed cleaning. Mike walked up and stopped just behind her.

“Thank you for breakfast.”

“You’re welcome,” she said without turning around.

He reached up and pushed her black hair to one side, exposing the button and the three tiny holes on the back of her neck. She tilted her head slightly to one side, no doubt expecting him to kiss her neck. With his other hand, he reached into his pocket and found the tiny electronic device. He rolled it between his finger and thumb. He could easily poke it right into her u7 port. If she really needed the upgrade, now was the time to do it.

“Yes?” She turned around and smiled that wonderful smile that said there was nobody else in the world as special as he was.

He thought about leaving the u7 in his pocket and throwing it away later. If he wasn’t going to use it to force an upgrade, then there was no point in even bringing it up.   He slowly pulled it from his pocket and held it up before her. Patience’s eyes went cold and her hand shot up, slapping his and sending the tiny plug ricocheting off the far wall of the dining room.