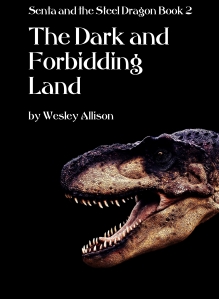 Saba Colbshallow sat on a piece of log. It was one of many which had been provided for local lizzies to sit. His left hand was full of small pebbles and he was tossing them with his right hand at a half rusted tin that had originally held butter biscuits. Most of the thrown missiles missed their mark and even when one did land in the tin it didn’t improve his mood. He had been in a bad mood for an entire week now, ever since the wedding. Could you call that a wedding? Five minutes in the Mayor’s office? Yuah deserved much better than that. She deserved much better than Master Terrence too. Saba wanted to say that she deserved him, but he knew that he wasn’t good enough for her either. She was an angel. He had loved her ever since he was seven. Then she had been a burgeoning sixteen-year-old beauty, with long dark brown hair and the most incredible eyelashes. Of course before that, he had fancied Iolanthe, now Governor Dechantagne-Calliere. But that was before she had changed. Not that he blamed her; he understood. Iolanthe was married, and now Yuah was too. And here he was, an eighteen-year-old corporal in the militia, and didn’t even have a girl.

Saba looked up to see a big man standing a few feet from him. Saba was six foot three and this fellow was just as tall, but with broader shoulders and a thick muscular chest. Though the man was a few years older than Saba, he was only a private.

“Nice to meet you, Shrubb.” Saba slowly stood up and stretched out a hand, which Shrubb took.

“What’s your Kafirite name, if you don’t mind my asking?” asked Shrubb. “Um… you are a Kafirite, aren’t you?”

“I’ve never seen so many zeets before.”

“I don’t much care for that word,” said Saba, icily. He was still thinking about Yuah and was predisposed to dislike anyone whom he thought might be aiming an insult even in her general direction.

“Do you always talk this much?” asked Saba.

“Good. My first name is Saba. What would you say to some fish and chips?”

“I don’t generally talk to my food.”

Saba led the way across the dirty patches of snow that still covered the militia grounds, stepping over the low fencing, and out into the gravel street. Then they started down the hill on Seventh and One Half Avenue toward the docks. The street was lined on either side with workshops and warehouses. Most of the workshops had open fronts and one could peer in as one passed to watch men working at lathes, saws, and other pieces of equipment. Most of the warehouses on the other hand had their massive doors closed, as there was no ship in the port at the moment.

“That’s right. Arrived two weeks ago on the Jaquesville.”

“No. Left home when I was just a lad. I was working on the docks in the city and heard about opportunity.”

At the bottom of the hill the road ended at the broad expanse of the dockyard. Though there was little work to be done here, there were several gangs of lizzie dock workers who were being trained by their human foremen so that they would be ready for the arrival of the next big transport. Saba kept up with the ship schedules from boredom as much as anything else, so he knew the next arrival was supposed to be the S.S. Windermere on or about the twenty-ninth.

“So, you’ve been here since the beginning?” asked Shrubb.

“I was told you were the one to ask about things.”

“Who told you that?” wondered Saba.

“Oh, well. As long as you don’t ask him about anything, you’ll be fine.”