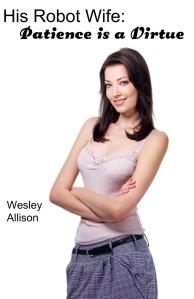 Ryan spent the last day of the cruise with Patience and Mike. Despite medical advice and a continuing pain in his neck, he signed himself out of Medical and met them at their cabin that morning. They expended little energy, staying away from the water park, or the Ferris wheel, or even the casino. They did visit the penguin habitat and even sat by the Celebrity Pool for an hour.

Just after noon the M.S. Bacchanalia came to rest in its usual spot at the end of the long, thin peninsula. Patience made sure that Ryan’s bags, as well as their own, were all properly packed before turning them over to be transferred to the airline. She made a quick stop at Medical and Security to say goodbye to Moira and Carl.

As they took the people mover belt from the ship to the transportation terminal, there seemed to be far more people than when they had been traveling the other direction. There also seemed to be many more people unaccompanied by robots. Once under the great domed ceiling of the terminal, they saw why.

Hundreds of inactive Gizmo robots were standing, leaning, and in some cases stacked one upon the other at one end of the massive room. Comanco, the company that provided the Gizmo operating system, had set up a special station where the afflicted individuals had their systems wiped and then reinstalled. Patience just shook her head.

The two men and one robot had halfway crossed to the huge escalator, when a man in a brown suit intercepted them. In one hand he held a briefcase and in the other a clipboard, so he didn’t offer to shake hands when he spoke to them.

“I’m a representative of Rio Cruise Lines. We would like to give you this check for $75,000 to cover your expenses and the loss of your property. Also in this envelope you will find two free tickets to another Rio Cruise Lines cruise of your choice. There is no expiration date. You can use that anytime you want to. We just need you to sign this receipt.”

He shoved the clipboard toward Ryan.

“Hold the phone,” said Mike. “Patience, look over that form.”

The man tried to pull the clipboard back, but Patience quickly snatched it from his hand.

“It is a release of liability,” she said, after giving it a once-over.

“Nice,” said Mike with a scowl. “You ambush him and shove this in his face. He’ll take this home and read it, and then he can decide if he wants what you’re offering him or not.”

“No, it’s not. You send him your contact info and he’ll call as soon as he decides whatever he decides.”

“I really don’t think I want to sue the cruise lines,” said Ryan.

“I’m not saying you should,” said Mike. “Just go home and read this paper before you sign it. Then, when you’re comfortable in your own home and in your own time, decide what’s best for you.” He glared at the man. “Is that all right with you, or is it too reasonable?”

The flight home seemed even longer than the flight south had been. Mike was in no hurry to get off in Buenos Aires, so they stayed on the plane. As it turned out, those passengers who had stepped off were quickly ushered back on when a large bomb exploded three miles from the airport, just outside the green zone. The plane took off on time but with many worried occupants.