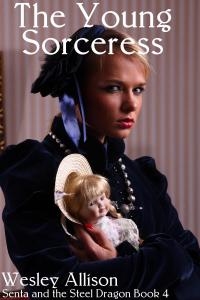 Birmisia was full of life in the spring. Wildflowers seemed to suddenly appear just about everywhere. The days were warm and wet, with frequent fog and almost daily rain showers. The giant maples grew new leaves, adding their lustrous green to the ever-present deep emerald of the tremendous pines. Ferns opened up their fronds in the dappled light beneath the mighty trees and in those places with no light, large and varied mushrooms showed their rounded heads. Plants were not the only life forms present though. The land was alive with both birds and beasts. One could easily spot cormorants, snipes, rails, and wrens hopping through the trees along with the strange four-winged microraptors. A few godwits, grebes, puffins, and pelicans occasionally strayed inland from the shore.   On the ground caudipteryx, buitreraptors, bambiraptors, meilong, and mahakala ran among the ferns looking for small lizards and snakes and large insects, which were everywhere. They didn’t bother the opossums or the mice, which stayed snug in their dens until nightfall. In the open areas huge iguanodons grazed, sometimes accompanied by triceratops and ankylosaurs. Most of the large predators like the tyrannosaurs and utahraptors had become scarce due to the presence of man, though the velociraptors and deinonychus were still thick, as happy to scavenge human trash as to hunt the other Birmisian creatures.

A flock of seven velociraptors made their way down the road. They went in fits and starts, pausing to snatch a lizard or small rodent from among the ferns and squawking at each other. They were, like all of their species, covered with hairy feathers, yellow near their small arms, and green everywhere else. Most of this particular group had a black band around the base of their necks. They were only about two and a half feet tall, but their long tails stretched straight out almost five feet. The most famous features of the velociraptors were their feet, each of which had a three-inch claw curving upward, and their long many-toothed snouts, more like something one would expect to see on a crocodile than on a bird. The leader of the flock raised its head as it spotted a human walking toward them from down the lane.

Velociraptors seldom hunted human beings unless one was wandering alone and injured. It had little to do with size. Some of the animals that fell to the feathered runners were much larger than man-size. Though velociraptors were not known for their intelligence, they possessed a cunning that matched most aerial birds of prey and this allowed them to determine which potential targets were more likely to become their supper than the other way around. Simply put, most humans didn’t act like prey. A few did. They started, and jumped with fear. But most didn’t. They didn’t quite act like predators either. They blundered around the forest without regard to what they might run into. To the velociraptors, they were simply too confusing to be bothered with unless there was nothing else to eat. And in spring, here in Birmisia, there was plenty to eat.

Regardless of their intent on hunting this particular human, the flock fanned out, following their instinctual behavior for both hunting and defense. Three took positions on either side of the road, moving in and among the shelter of the trees, while the leader moved into direct confrontation. This way they formed a triangular trap around the animal, in this case a human, directing it forward and keeping its attention away from potential attackers on the side. What happened next cemented in the tiny minds of the velociraptors as much as anything could, that this human was a poor choice for prey.

This human being was a teenaged female, and though biologists still debate whether velociraptors can distinguish between the sexes of mammals, others of her kind could immediately recognize her gender by the long flowing deep violet velvet dress, made more expansive by an extensive bustle over her rear end, and the long flowing blond hair held back by the deep violet velvet ribbon fastened on the side. Tens of thousands of other human beings could in fact identify this particular human female, because this particular human female was the young sorceress Senta Bly. She was hurrying home from the Hertling house where she had enjoyed afternoon tea. When she noticed the brightly feathered creature standing directly in her path, she flipped her hand toward it and muttered a single word under her breath. A bright blue ball of energy flew from her fingers to the velociraptor, which exploded into a puff of yellow, green, and black feathers. Its comrades disappeared into the forest.

Senta had scarcely passed the spot in which the velociraptor had stood when she was brought to a stop by a honking coming from behind. She turned around to see a shiny steam carriage chugging down the road toward her. As she waited, the vehicle slowed and came to a stop. A tall man in the uniform of a police sergeant looked down at her. His thick blond hair, flashing moss green eyes, and confidant air made him handsome in a way that the recently acquired bend in his nose couldn’t detract from.