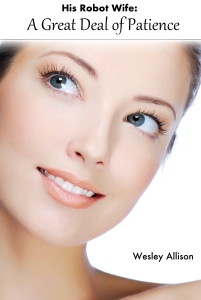 Lucas realized he was awake as he slid his hand down Haruka’s naked body. She was on top of him, her legs straddling his hips, her head on his chest. They had fallen asleep in that position. She was so light, he could hardly tell she was there. He lifted his head and turned it to see the clock.

“Didn’t you say you wanted to speak English at home?”

“It’s mostly your mess,” she said.

He rolled to his side and gently pushed her away. She flopped onto her back, her arms above her head, her small breasts pointing toward the ceiling. He smiled at the bright orange koi tattooed over her right hipbone. He gently ran his finger over it.

“Stop! You’re tickling me!” She squirmed, but made no move to protect her stomach from his assault.

“I don’t know how you ever got this, being so ticklish.”

“I was very drunk at the time.” She sat up. “I’m going to get your name tattooed right across my chest.”

“In English or in Japanese?”

“Maybe both. I could have your name in English across one boob, and in Katakana across the other.” She ran her hands below her breasts, on her ribs. “Or maybe here, curving along like this.”

“What would your parents say about that?”

“They won’t say anything, because I’m not going to tell them. I didn’t tell them about the koi fish.”

“I think I like your chest the way it is now.” He climbed to his feet.

Walking through the living area, he stepped into the close confines of the bathroom. The room was really three closet-sized compartments. The closest had a tub, about a meter square and not quite a meter deep, with a seat in the corner. Next to it was the room with the toilet. It was so small that Lucas had to leave the door open when he sat. Beyond that, a third compartment contained a small sink. He turned on spigot in the bathtub first, and then stepped around to turn on the cold spigot and then the hot at the small sink. He wet a wash towel and soaped himself up and then used another to wipe himself off. The tub was about half full by that time, so he turned off the sink faucets and he climbed into the tub. The water was hot and steam began to rise, coating the enclosure’s walls with condensation. He closed his eyes and leaned back. When he had first arrived in Japan, it had seemed strange to wash before getting into the tub, but it was considered impolite to get into the bathtub while still dirty. Since they had no shower to use first, he and Haruka had to make do with the sink.

Just as the water was reaching the middle of his chest, Lucas heard the faucet being turned off. He opened one eye to see Haruka, still naked, sitting on the edge of the tub with a razor and a can of shaving cream in one hand.

She sprayed lather onto her fingers and then spread it onto his face.

“I’m going to be your wife. You have to trust me.”

“Where is that written?” he wondered.

Pulling the safety cover off the razor, Haruka ran it over his cheek.

“Bottom to top on my neck,” he said, tilting his head back.

She took a swipe upward, below his left ear.

“This reminds me of sledding in the snow,” she said. “We used to have snow here in the winter sometimes.”

“I’ll take you skiing in Colorado.”

“Do they still have snow there?”

“It’s America. If God doesn’t supply it, we make it ourselves.”

“Um, sure. Ouch.” He touched where she had just shaved and examined the spot of blood on his finger. “So much for trust.”

“That is only a little blood. You have lots more.” She frowned in concentration and took another swipe at his throat.

“You should do this for a living.”

“I think I had better stick to translation,” she said, eyeing his neck. “Turn your head so I can get the rest. Then you can wash the blood off.”