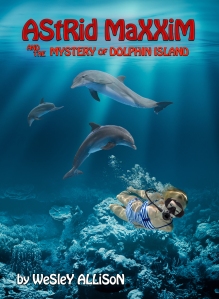 By the time Astrid was back on the shore, she was exhausted from swimming. Being near the dolphins was so exhilarating that it was easy to forget that treading water was hard work. After drying off, the three young women went back inside the house, where the girl inventor, assisted by Océane, continued the task of entering Adeline’s findings in the new database.

“Are you two hungry?” asked Adeline, sticking her head through the doorway.

“We just had lunch,” said Astrid.

“That was hours ago.”

Glancing at her watch, Astrid realized that, once again, time had gotten away from her.

“I made supper,” said Adeline.

“Eleanor and Penelope aren’t back yet?”

“No, and I’m starting to really worry. It will be dark soon. Anyway, we should eat.”

They had just sat down when the sounds of a motor outside sent them to see the speedboat sliding through the lagoon, bearing their missing companions. Eleanor tossed the line to Océane, who tied it to a tree.

The vessel was indeed loaded with gear. The five young women spent almost half an hour unloading it. There were boxes of scuba gear, air tanks, bags of clothing, and four crates of groceries.

“What did you do?” wondered Adeline, when they were all back inside the now very crowded little house.

“Eleanor told me how you scrimped to make due till the end of the season,” said Penelope. “I just thought I would help out a bit.”

“She bought us three new aqualungs and all the gear to go along with it,” said Eleanor. “She got us a new compressor too.”

“I also bought clothing for Astrid and me,” said Penelope, “since we had only packed for a weekend. I got us a couple of swimsuits too, Astrid.”

They ate their meal and then Penelope helped clean up while Astrid and Océane returned to their data entry. By bedtime, all of the files had been transferred and the information from the journal typed in. All that remained was to index the two together.

In the morning, Astrid enjoyed a breakfast of pain perdu, which Astrid’s translation app described as “lost bread,” but which she found out was French toast.

“I didn’t really think they ate French toast in France,” she said.

By lunchtime, Astrid had a functional database with all of the dolphin sounds indexed to their possible meanings. That afternoon, she began transferring it to several MX-360 personal digital assistants. The devices were waterproof, but had very small microphones, akin to those found in phones. She planned to connect them to powerful underwater microphones that she had received at the Maxxim Store, devices that were not originally designed to work together. In the end, she had to wrap the connection with kitchen plastic wrap and hope that it would stay watertight. She explained the devices’ operation to the others over sandwiches.

“It should be pretty straightforward. I’m afraid they are going to require both hands though, one to hold the MX device and the other to hold the microphone. When the microphone picks one of the dolphin sounds, it should give the corresponding meaning on the screen and speak it into our earphone. To speak, we have to select our text from the screen and the device will play the sound. Hopefully the dolphins can hear it. Since the MX-360 is designed to function as a music player, it has a much louder speaker than it does a microphones.”

“We already know the dolphins can hear it,” said Adeline. “The year before last, we played music for them.”

“I’m curious about something though,” said Astrid. “There are three sounds that don’t have meanings.”

“Those aren’t sounds the dolphins have made,” said Adeline. Those are three sounds we have created to try and introduce new words. The first means scarf. That’s something we have been using with the dolphins. The others are our names—mine and Océane’s.”

“We’ll make one for you,” laughed Adeline. “Then tomorrow, we’ll take the boat out and try the equipment.”

“Why not today?” wondered Penelope.

“The dolphins will be here at the island this afternoon,” said Astrid. “We swam with them yesterday while you were gone.”

“We’ve been recording them at Swen’s Atoll,” said Eleanor. “It’s the top of a large underwater hill. The top is about twenty feet below the surface. They’re often there in the mornings.”

“They’ll be back here today, won’t they?” wondered Astrid.

“Come on.” Penelope took Astrid by the elbow and led her toward their little office. “Let’s try on our new swimsuits.”