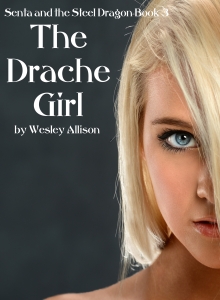 “As he was trying to shoot me at the time,” Radley Staff paused to bring the whiskey glass to his lips.  “I consider it rather good luck.”

The four men sat at a small table in the first class lounge, sipping their drinks and smoking cigars.  Outside, the railings had formed a thick decoration of long, pointy icicles, and the deck was rapidly becoming obscured by a white blanket of snow.  The grey day was well on its way to becoming night in spite of the fact that it was only four in the afternoon.

All four men stood up as the severe looking woman approached in a black dress. Her graying hair was pulled tightly back into a long pony tail and her lips were so thin, it seemed as though the pony tail was pulling most of the skin of her face with it.  Her black dress was not a robe, not quite, and as was almost all feminine attire, it was endowed with a prominent bustle, but had no brocade or lace, just a priestly collar at her neck, and a thin strip of white running from each shoulder to the floor.  She had a large and ornate golden cross on a chain around her neck.

Mother Linton nodded to each.  “May I speak to you, Mr. Dechantagne?”

He shrugged and stepped away with the priest.

“So what do you say about this weather, Staff?” marveled Shannon. “Whenever I think of Mallon, I think of the jungle.  I never expected snow.”

“I suppose there is a great deal of Mallon that’s tropical,” replied Staff, “but Birmisia is cool, dry, lots of pine trees.  Even the summers are not too bad.  That’s good from a business perspective, too.  Nobody wants to muck around in swamps.  That’s probably why Enclep isn’t better developed.”

Dechantagne returned to the table and sat down.

“What was that all about?” asked Staff.

“It seems Mother Linton has been pegged by the Bishop of Brech as the High Priest of Birmisia.”

“And priests are no different than anyone else.  They all want something.”  He waved to the waiter for another drink.

“And what does she want?”

“Oh, it’s all Mother Church this and Mother Church that.”  Dechantagne picked up the cigar that he had left smoldering in the ashtray when he had stepped outside with Mother Linton, and he stubbed it out.  Then he got up and walked out the door, intercepting the waiter for his drink along the way.

“So, you don’t think he’s a major player?” wondered Shannon.

“Oh, he may prove a friend to our business,” said Staff.  “But make no mistake, Mrs.… his sister is the one who’s in charge.”

“Excellent.  I’m glad to see you know your way around,” said Merchant.  “Have you had a chance to talk to Buttermore?”

“The office man?  I did. I didn’t have a chance to meet all of his staff, or the engineers.  Shame they couldn’t be in first class.”

“My boy, do you know how expensive that would be?” asked Shannon.  “There are ten of them, and ten more family members besides.”

“Yes, but that would be twenty first class passages that wouldn’t be available for sale.  It’s not like we put them in steerage.  Second class is very nice.”  Shannon’s face was becoming pink.

“We would have had you bumped up to a first class cabin if we had known,” said Merchant.

“I don’t have enough baggage to need a first class cabin.  I’m fine where I am.”

“Very sensible,” said Shannon, his face returning to its normal rather jaundiced hue.

“Well, Buttermore seems like a good man.  He knows exactly what we need to do.  I’ll handle the connections with the government and then we can get started. Of course, there’s plentiful unskilled labor.”

“Excellent,” said Merchant.  “If this all goes as well as I’m expecting it to, we’ll have to send over our short accountant to count all our money.

The dinner bell rang and Staff said goodbye to his two employers and went to his table.  The broken glass had been repaired and the dining room looked none the worse for wear. As usual, the darkly beautiful Amadea Jindra was already seated; her heavily laced white dress was a study in contrast with her dark olive skin.  As Staff sat down, he noticed the plunging back left both her shoulder blades sensuously exposed.

The waiter brought a salad of leaf lettuce and thinly sliced fruit.  It was garnished with a peach cut into the shape of a rose.  A moment later, he returned with glasses of sparkling wine.

“You must come from a wealthy family, Miss Jindra,” he said.  “To be able to travel first class passage alone to Birmisia.”