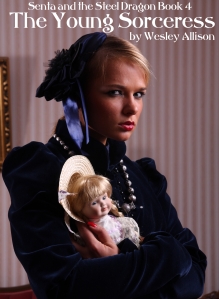 Isaak Wissinger walked through the cobblestone streets of Magdafeld.  He tried to be as inconspicuous as possible, but that was relatively hard to do on this particular morning because very few others were on the streets.  Magdafeld sat high atop a hill in the center of a long flat plain, so even though it was spring, a chilly wind whipped about.  He tucked his head down and pulled up the collar of “borrowed” trench coat.  When the sounds of a chugging steam carriage approached from behind, Wissinger tensed. He watched carefully as it passed, trying not to seem as if he was watching carefully.  The vehicle had an enclosed cab behind the driver, though it was easy enough to see that there was a man and a woman inside.  The vehicle shot past him, but came quickly to a stop half a block away.  Then it slowly backed up.  Wissinger looked for a side street down which to escape, but there wasn’t one.

The car finally came to a stop next to him.  He tried to continue walking.

“You there!” called a voice as a man climbed out of the car.

To his horror, Wissinger saw that the man wore the uniform of a Freedonian Army colonel.

With a sigh, Wissinger turned around, affixing as convincing a smile as he could possibly manage.

“Where can I find a strudel shop around here?”

“Oh, I don’t know,” replied Wissinger.  “I live on the other side of town.  If you’re over there, Volker’s Bakery is the best.”

“What are you doing on this side of town then?”

“I’m visiting my cousin.  She’s sick and I have to help with the kinders.”

“You have papers?” asked the Colonel.

“Of course.”  Wissinger pulled out his forged papers.  He had paid well for them, but didn’t really know just how good they were.

“Fritsie!  Come on!” said a woman, who then poked her head out the car window.  She was a gorgeous blonde in a red dress that left her shoulders bare.  “I’m hungry!”

The officer looked back at her and grinned.

“Be on your way,” he told Wissinger, and then climbed back into the car and the woman’s embrace.

The writer hurried the rest of the way down the street, turning right at the first intersection he came to.  This particular avenue provided a magnificent view of the surrounding countryside as it wound its way down the hill to the river dock and the adjacent train station.  Even Wissinger, who was much more interested in watching for potential pursuers than sightseeing was suitably impressed.  It brought a smile to him and a lightness to his step.

Any burgeoning happiness was squelched however when he reached the railroad crossing.  Three Freedonian soldiers, an officer and two enlisted men carrying rifles, were checking papers of those who would cross the tracks either to reach the train station or the dock beyond.  There was no way around and Wissinger needed to get on the ferryboat to go down the river. He took his place in line behind a woman in a green scarf.  When he got within a dozen steps of the checkpoint, his stomach suddenly jumped up into his throat. The officer checking papers wore a four-legged fylfot on his lapel, with a matching symbol on a red armband.  He was no mere soldier.  He was a wizard of the Reine Zauberei.

“Papers,” said the wizard with a sigh, to the woman in the green scarf.

The woman handed the wizard her papers.  He didn’t open them to read or examine them, but simply ran his hand over the outside cover.  The papers glowed a sickly yellow for a moment.

“Where are you going, Mrs. Kraus?” he asked her.

“I’m taking the ferry to Rivenholz.”

“Your business in Rivenholz?”  The wizard could not have seemed more bored.

The exchange was interrupted by the sounds of men shouting from the train a hundred feet up the track.  Everyone at the checkpoint turned to see a man fall from one of the train’s doors and land flat on his back on the gravel below.  There were more shouts, though what was being shouted was completely unintelligible.  The wizard turned to the two soldiers.

The two riflemen dutifully trotted toward the parked train. A loud whistle rent the air, and the train on the other side of the station slowly started moving.  It was headed toward Kasselburg and Bangdorf, the opposite direction that the ferry, and the other train, would be traveling.

“Say hello to your cousin, Mrs. Kraus,” said the wizard.

“My sister,” answered the woman, taking her papers and heading on her way.

Wissinger stepped forward and handed over his papers before being asked.  As he had done before, the wizard placed his hand over them, causing them to glow sickly yellow.

“My great-grandfather, on my mother’s side.”

In Freedonia a ritter was a knight, a rank which entitled a man and his descendants to add “von” to his surname, though the actual knighthood didn’t pass on through the family tree.  Wissinger had reasoned that no one using forged papers would be so bold as to use the honorific and hence less suspicion would be thrown upon him. Looking at the wizard though, he now began to rethink that theory.

“And your name, Wizard?”