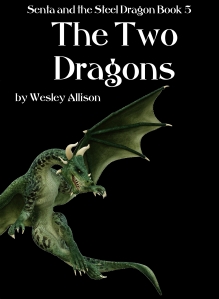 Governor Staff’s office was huge.  The ceiling was more than twenty feet high and the entire south wall was made up of large windows that looked out over the burgeoning city.  The opposite wall was filled with two large world maps.  One featured Sumir and the western hemisphere, while the other featured Mallon and the rest of the east.  More than a few citizens of Port Dechantagne who had never seen it, referred to it as “the throne room”.  It did not however have a throne.  It had an oak desk the size of a small battleship, and next to that a globe so large that it took two people to turn it on its axis.  Those who had been there knew better than to refer to it as a throne room.  This was not the domain of a queen.  This was the room of an empress.

The black leather clad wingback chair behind the desk was not just a nod to comfort.  It was designed with comfort, the comfort of a woman wearing a fashionably large bustle, in mind.  Iolanthe Staff seldom sat in it however, and almost never when she was interviewing anyone in her office, as she was now.  She paced back and forth behind her desk, with her arms folded across her chest. The two men, seated in equally black, equally leather, and equally comfortable chairs across the desk from her, watched her uncomfortably.  One wore the uniform of a merchant seaman.

“There is no doubt about it, Lieutenant Burke?” Iolanthe asked.

“None what-so-ever, I’m afraid.  The Mistress of Brechbay was hit by a torpedo.”

“It looks as though you were correct, Wizard Bassington,” she said to the second man.

Smedley Bassington was dressed in a stiffly starched black suit.  His froglike mouth smiled without any pleasure and his beady eyes stared back.

“The torpedo was launched from a submersible boat.”

“You know whose.  Freedonia has more than a hundred of them, and I would be surprised if a tenth of that number wasn’t prowling the shipping lanes between Mallontah and Birmisia.”

“Then what are we to do about it?”

“We must utilize the great equalizer—magic.  Ships making the voyage from Greater Brechalon must have a protective ward to hide them from the Freedonians, and anyone else seeking to do them harm.”  He paused and licked his wide lips.  “Fortunately we have the world’s foremost expert at concealment magic.”

“Shall I leave it to you to arrange it with her?”

“Lieutenant Burke,” said Iolanthe, finally stopping her pacing.  “Do you have a place to stay until your company’s next ship arrives?”

The officer stood up, bowed, and then exited the room.  Bassington stood up as well.  Iolanthe walked around the desk to stand face to face with him.

“Wizard Bassington, do you still feel that the Freedonians have a hold in Tsahloose?”

“Is my trade expedition in any serious danger?”

“I’ve given you my opinion on this matter before,” said the wizard. “Sending a dozen Brech citizens, however accomplished and resourceful they may be, hundreds of miles across uncharted territory and into the capital of a primitive, inhuman, and bloodthirsty empire was always, how did you put it—speculative.  I call it bloody unsafe.”

“So you think I should call them back?”

“Absolutely not.  There is a great deal of intelligence to be learned from such a trip.  We both have high confidences in who we have sent into harm’s way, don’t we?”  A smirk crossed his face from left to right.  “You do have the fullest confidence in your latest bedmate, do you not?”

“Neither my husband’s abilities, nor his acumen are in question.  I likewise have faith that those he has chosen for his team will all dutifully fill the roles to which they have been assigned. Can you say the same?”

“You mean my sorceress?”

“I mean your little girl.”

“Senta is practically a grown woman.  She had already proven herself a steady soul when she helped rescue your brother years ago. She showed her power on her last trip to Mallontah.  She can handle anything that should turn up.  Besides, General Staff has indicated that he would take no other practitioners of the arts with him besides Senta, or possibly the steel dragon.

Iolanthe pinched the top of her nose.

“I ask a great deal of those I delegate any of my authority to,” she said. “I shall be asking the same of you. I need you to get that infernal machine running again.”

“As a matter of fact, I have a man coming in on the train from St. Ulixes who may be just whom I need to set the great machine to rights.”

“Can’t you just use your magic?”

“The Result Mechanism isn’t a magical device.  It’s not all that different from a large clock or a steam engine. Its results are all mathematical and therefore magical, but its functions are like that of any other gear-driven, spring-powered device.  And my man is an expert on just that.  Once he has it working again, we can have your young woman help me with the… what’s the word?”

“Exactly.  Miss Lusk will be needed there.”

“It’s Mrs. Korlann now.  But, it looks as though you know what you’re doing.”  She turned to look at the bookcase behind her.  Her back was an invitation to leave.  He took it.