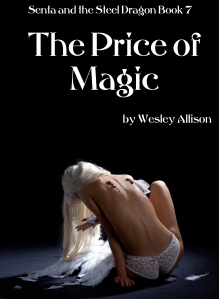 Peter Bassington didn’t even notice that it was dark until it became impossible to read the book in front of him.  He looked up at the clock on the wall and felt his neck complain.  He had been bent over the books for almost five hours, and now his head was swimming with almost maddening thoughts.  He glanced back at the text he had just finished.

She floated down from the sky, her huge, feathered wings outstretched.  They were twelve feet from tip to tip and as white as the clouds, as white as newly fallen snow, as white as faith and hope.  The rest of her body was smooth and supple and sublime and beautiful and naked.  Her tiny feet came gently to rest in the soil beside the bizarre purple flowers, each of which looked up at her with a large eyeball in the center.  Her face was beauty incarnate and her body was bliss.  Long blond hair cascaded down her shoulders, impossibly thick, almost to her waist.  Her eyes were spaced wide above her prominent cheekbones and small but perfectly formed nose. Her full lips smiled crookedly exposing straight teeth as white as her wings.

It was here, in this endless field of loathsome purple flowers, where she waited for them.  And they came.  They came to her.  They retreated here from the world, when they rubbed the See Spice into their eyes. And here she took care of them; took away all their cares, took away all their fears, took away all their pain. She also took away their love, and their desire, and their sense of self.  She left them the empty husks of what they had been and would never more be. They called her angel, and they willingly gave themselves to her, and she feasted on their insides like they were her own personal drinking gourds.  But she wanted something more. She wanted to leave the endless nothingness of that place and come to the real world, where she would feast on the marrow of all that is good and pure and true.

The passage didn’t mention a name, but Peter knew to whom it was referring.  Her name was Pantagria.  She was an angel or demon that those addicted to white opthalium saw when they used their drug.  He had heard her name uttered once or twice by addicts on the street or in opthalium dens. But most of what he knew came from Senta.  Two and a half years earlier, while they were journeying to Birmisia from Brechalon, an addict, one of Pantagria’s minions here in the real world, had thrown white opthalium into Senta’s eyes.  This transported her to that other world, where Pantagria had begged her to use her art to bring the angel to the real world.  Senta had managed to escape.

The whole story had sounded like a fairy tale and Senta wasn’t above a bit of self-aggrandizement on occasion, so Peter hadn’t been too sure of the authenticity of every detail, but here it seemed to be verified in black and white—in a book written almost two hundred years earlier by a man named Viner.  And there were other mentions of Pantagria going back a thousand years.  Then there was the note scrawled in the margins of the Viner text “Nom 2:3-4”.

Peter pulled himself to his feet and walked from the dining room, through the parlor, and down the hallway to the library.  It was so dark in the room, he had to feel around for the gas light sconce on the wall. Pulling a match from his pocket and striking it, he turned the knob, and the hissing gas burst into bright yellow flame, illuminating one side of the room, and throwing shadows of chairs and tables on the other.  The young wizard retrieved a pristine copy of the Holy Scriptures from the bookcase and flipped it open.

“Bother,” he said. There were three books of Nom: The Writings of Nom, The Letter of Nom, and The Children of Nom.”

Looking at The Writings of Nom, chapter 2, verse 3, he found“I have need of you,” so saith the Lord.  “I have need that you will sacrifice of yourself.”  Not particularly inspiring or helpful.  He turned to The Letter of Nom, chapter 2, verse 3.  One thing I ask of the Lord only, and I hope with all my heart that he will grant my prayer: that I may dwell in the house of the Lord all the days of my life. Finally he turned to The Children of Nom and as he read, he felt ice filling his belly.

Bloody hell.  That was the Grand Scriptures too.  They were, what?  Three thousand years old?  It was too big—too much to think about.  He turned out the light and felt his way back to the parlor.  Then he climbed the stairs and slipped into his bedroom. Peeling off his clothes, he dropped down onto his bed and passed into a fitful sleep.

The next morning, Peter, as usual, found Baxter and Sen at the table having breakfast.  The girl had a toast soldier in one hand and her wooden dinosaur in the other.  The man was sipping a cup of tea while reading from a small paperback book.

“What are you reading?”

“Attack of the Zombie Women,”Baxter replied, turning the book to display a luridly illustrated cover picture, then he pointed at the occasional table against the wall.  “I put your books all over there.  I left them open to your pages.”

“No.  What would you like for breakfast.  Cook has some kippers.”

“All right.  Do we have any potatoes?”

“Potatoes yes, tomatoes no.”  Baxter turned toward the kitchen and called, “Kippers and fried potatoes for Mr. Bassington!”