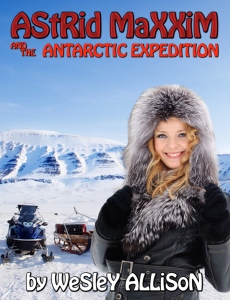 As soon as she had hung up, she looked up a second number and dialed.

“Department of Scientific and Industrial Research, Geophysics Division, how may I direct your call?” said a female voice.

“May I speak to Connor Brown?”

“Who may I say is calling?”

Seconds later the line was picked up and a man’s voice said, “Hello, is this really Astrid Maxxim?”

“Are you calling about my hoverbike? It was just delivered but I haven’t had the chance to try it out yet.”

“Oh, well I’m glad you got it,” said Astrid. “But that’s not why I’m calling. You are the Connor Brown who is the head of Antarctic research for New Zealand, aren’t you?”

“I am the Director of Operations, the organizational head.”

“Well good. I’ve discovered some data about an Antarctic expedition that was made in 1928 by my great-grandfather. Their records indicate they discovered something important beneath the ice, but I can’t find any record of what it was. Since the location is within New Zealand’s area of authority, I thought I would give you a call.”

“Hmm,” said Brown. “We don’t normally have any personnel on the continent during the winter, but we have this idiot… this movie director who is filming a documentary. Maybe this is something he can check into.”

“That’s great. I’ll send you copies of the maps and other information.”

A few minutes later, Astrid was back outside, astride her hoverbike, and strapping on her helmet. She felt the ground shake briefly like an earthquake. Then two seconds later there was a tremendous boom and one of the glass panes in the front of the R&D building shattered. She looked up to see a huge black cloud rising up into the air about five miles to the south. Astrid knew just where it came from too— the Maxxim rocket launch facility.