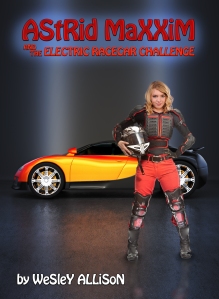 Feeling her stomach growl, the girl inventor looked up to see that it was almost 1:00 PM. She decided that rather than visit the cafeteria there in the R&D building, she would go on home. Chef Pierce could fix her something light that wouldn’t spoil her dinner that evening with Toby.

The weather was warm for late March, though it was a bit windier than one might have wished, flying fifty feet above the ground. Zipping down low, just over the tops of the saguaro cactuses and zooming back up and over the high red rocks, made Astrid smile. When a few strands of hair slipped from beneath her helmet and down onto her forehead, she broke into a laugh. She finally had hair long enough to get in the way!

Suddenly the gentle humming, which was a constant companion to anyone flying a hoverbike, went silent. The flying scooter dropped toward the ground like a brick, and Astrid went with it. She tried to steer toward a spot of soft sand, but the vehicle was completely unresponsive. There was no time to do anything else. Pushing herself away from the no longer flying scooter, she landed in the soft desert sand, just as the hoverbike crashed on a slightly firmer patch of gravel.

It was a minute before Astrid could suck any air back into her lungs. Though her entire left side hurt, there were no pains that stood out from the others. Carefully checking her legs and arms, and then feeling over the rest of her, Astrid decided that she hadn’t broken anything, at least not too badly. She sat slowly up and looked at her hoverbike. It was sitting about ten feet away. Though its frame was intact, the hoverdisks on the bottom were smashed to pieces.

Astrid tapped her Maxxim Carpé watch computer with her finger. Then she looked down at the device. The screen was shattered and there was a dent. Retrieving her phone from her pocket, she pressed the speed dial to her father.

Getting to her feet, the girl inventor looked at the landmarks all around her. Ahead of her, she could see the low rise of hills between her and Maxxim City. To both the north and south were large sandstone hills. She was north of the Saguaro Cactus Park and miles northeast of Pearl Lake. If she walked downhill, she would run into one of the many dry riverbeds in the area. They all flowed toward Pearl Lake, and between it and her was the monorail line.

“I think I can walk to the monorail from here,” she said. “It may take me an hour or so.”

“Astrid, stay where you are. How’s you’re phone battery?”