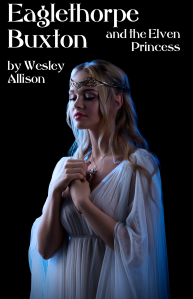 Chapter Thirteen: Wherein I run into an old friend unexpectedly.

Princess Jholeira and I, and of course Hysteria, made our way east, following the road which is called the East Road, which is only appropriate, as it goes east… and it is a road. I had pretty much accepted that the girl thought she was a princess. She was convincing enough as she told me of life growing up among the royalty of the elven wood. I listened to her descriptions, because you can never have too much local color to throw into a story, but I didn’t commit much to memory as far as the events of her life were concerned. There just wasn’t much of a plot there. But to return to the point, generally speaking, if someone thinks they are a princess, I have found that it doesn’t much matter whether anyone else thinks they are or not.

At teatime we stopped and I made a fire, brewing some coffee and whipping up a pan full of biscuits. These were not like biscuits in Aerithraine. There biscuits are crunchy little sweet things—what my poor old father called “cookies” though you bake them instead of cooking them. These were what they call biscuits in Lyrria—something in the sort of a soft scone made with flour, salt, and animal lard. If we had only had a bit of honey they would have been quite good, but alas I had no honey. They filled us up though and both Jholeira and I were glad for them. Hysteria didn’t think very much of them though and she was mopey again for the rest of the day.

We traveled until dark was starting to settle. I had just decided that it was time to look for a campsite when my little orphan princess spotted the lights of houses some distance away. We continued and arrived at a thorpe, which is to say a hamlet or a small village. It was very small too, having only a single inn and half a dozen farmhouses. The inside of the inn was warm and inviting. We were greeted at a large counter just inside, by a husky innkeeper with arms like tree trunks and hands like hams. He had thick whiskers on either side of his face and when he smiled he revealed that both front teeth were gone.

“Two rooms,” said the girl. “And stabling for our horse.”

“Ixnay on the ootay oomsray,” said I. “I don’t have the money to pay for the one. I was hoping I might pay for it with my storytelling…”

“Is that the good-for-nothing no-count Eaglethorpe Buxton I see?” called a voice from the doorway beyond.

While the proprietor squinted at me as if to see if it truly were the good-for-nothing no-count Eaglethorpe Buxton in front of him and not a good-for-something mathematically fluent version, I turned to see my accuser. There in the doorway was my oldest and dearest friend—Ellwood Cyrene. He had a mug of ale in his hand and a smile on his face. He looked quite at home having left his armor and swords off as he relaxed, though I could see the two daggers he kept in his belt, the one he kept up his right sleeve, and the one inside his back collar, as well as his knife in his right boot and the throwing stars in his left.

“That cannot be Ellwood Cyrene,” said I, “walking around defenseless and drunk.”

He stepped forward and we embraced. It was a manly embrace. He held onto me a bit too long, but what of that? He was a bit tipsy no doubt. No one could ever doubt the manliness of Ellwood Cyrene.

“This is for two rooms and stabling,” said Ellwood, tossing the innkeeper a big gold coin. “No doubt Eaglethorpe will want to pay for his supper with story-telling.”

The proprietor’s face lit up. “It has been a long while since we’ve had a storyteller.”

“And it will continue to be a long while,” said Ellwood, punching me in a very manly way on the shoulder. “I said Eaglethorpe wanted to pay for his supper with story-telling. I didn’t say that he could. Come my friend, let me buy you a mug of the muddy liquid that passes for ale in these parts.”

And throwing his arm around my shoulder, in a very manly way, he led me into the common room of the inn. The orphan princess followed. We sat at a rough-hewn table and Ellwood waved for the serving wench. She was attractive, though not as plump as I like, and she didn’t have any of the buttons on her blouse undone, and it didn’t matter anyway because she had eyes only for Ellwood, who gave her a wink in return.

“She’s a girl and an elf,” I whispered to him. “But I want to keep it quiet. You know how much trouble women can cause.”

He nodded sagely, and then smiled at the wench. “A glass of milk for this poor pathetic ragamuffin.”

Jholeira playfully stuck out her tongue at him and the serving wench let loose with a peel of musical laughter as she went to get our order. Ellwood bought round after round as we sat talking of our service in the Great Goblin War and about our many adventures together. At some point, when neither of us was paying attention, the wench brought us a loaf of bread and a joint of beef and we ate like kings.

We had almost finished our supper, when Ellwood left to answer nature’s call. I had gotten up several times by that point, but Ellwood is renowned for his large bladder. As he walked away, my little elf girl leaned over to me.

“Have you ever noticed what a pretty man your friend Ellwood is?”

“Yes. I mean no,” I answered. “Absolutely not. How, why, how would I notice something like that?”