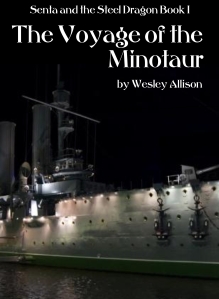 There seemed to be more people milling around on the starboard side of the ship, so he headed to the port, in hopes of finding a spot to sit.  When he rounded one of the battleship’s great gun turrets, Zeah saw why most of the others were eschewing this particular location. Zurfina the Magnificent was standing near the railing.  Her blond hair was its usual, carefully cultivated chaos.  She was wearing a dress which completely covered her from head to heel, but which was so tight and so contoured to her body, that it was more lewd than if she had been standing there naked.  Zeah would have sworn that it was made from rubber, had such a thing been possible.  The girl that had accompanied the sorceress when she had boarded was with her now. She too wore a black dress, in a more traditional style, though made of the same shiny substance.  And the question of what type of animal that the sorceress had brought aboard with her was now answered.  The case that she had carried when she had arrived sat beside the girl, and on top of the case perched a small, sinewy, winged reptile. It had a long, snakelike neck, and an equally long, snakelike tale, four legs and two thin wings.  It was covered in scales the color of new steel, even on its wings.  When it suddenly flapped them, sparkling reflections caused Zeah to cover his eyes. It was a dragon, the first that the head butler had ever seen.  The girl was feeding it pieces of raw, red meat with a gloved hand.  Between bites the tiny dragon would make growls reminiscent of an angry housecat and the girl would giggle.

Zeah paused for a moment, uncertainly.  He was about to turn around and go back the way he had come, but the sorceress looked up and saw him.  Not wanting to be seen a coward by one so powerful, he squared his shoulders and stepped forward with his porridge and pumpernickel.  The girl was sitting on a case covering some type of shipboard equipment, and the butler moved to sit next to her only a few feet from the dragon and the obscenely dressed magic user.

“You are more than welcome, Mr. Korlann,” said Zurfina, in her smoky, sultry voice.  “We are at our lessons.  Perhaps you can benefit from them as well.”

Zurfina raised her hand and a glowing sphere rose up from the deck.  It floated up until it reached the height of her shoulders, and then began expanding and becoming more opaque, until Zeah recognized it as a globe of the world, which stopped growing at eleven or twelve feet in diameter.  As it slowly spun in mid-air, Zeah could make out the shapes of the landmasses and oceans of the world.

“This is Greater Brechalon,” said Zurfina, and the shape of the four islands making up the country glowed.

“Yes it is, Pet,” said Zurfina.  “It’s just one of many countries on the continent of Sumir and Sumir is just one of the twelve continents.  We’re going to this one—Mallon.”

Another portion of the globe was illuminated as it slowly rotated around in mid-air.  This was a large portion of a tremendous landmass made up of four continents, and was almost on the opposite side of the world from Greater Brechalon and the rest of Sumir.

“And this area right inside of Mallon, is the land of Birmisia”

“True, it is only a small portion of Mallon, and yet it’s larger than all of Greater Brechalon.  You see that’s why the King and the Prime Minister want colonies on all these other continents.  There is all this land, just sitting there, filled with the riches of nature, and no one to reap them—a vast world without the benefits of civilization.”

“What’s so great about civilization?” asked the girl.

“You see, Mr. Korlann?” said Zurfina.  “Out of the mouths of babes come great truths.”

“Out of the mouths of babes and sucklings hast thou ordained strength over thine enemies, that thou might slay them and lay waste to their lands and their flocks,” quoted Zeah.  “For the kingdom of the Lord shall reign over all the other kingdoms of the world.”

“Yes, well,” said Zurfina.  “She has plenty of time to become disillusioned later.”

The tiny steel dragon startled Zeah, as it let out a short growl.  The little beast was undeniably beautiful.  It reminded the butler of a statue that was heavily detailed—the pointed barb and the end of its tail, the whiskers around its face, each individual scale fitting neatly together as it moved.”

“You have a question, Mr. Korlann?” asked Zurfina.

“Is this a real dragon?”

“How large will it get?”

“Far too large to sit where it is now sitting,” said Zurfina, her smoky voice punctuating the image.

The girl fed the dragon one last piece of meat, and then took off the leather glove that had protected her hand.  The dragon, evidently unhappy that his meal was over, let out a particularly long and unhappy growl.

“Does it have a name?” asked Zeah.

Zurfina clapped her hands and the giant globe disappeared.   She snapped her fingers and the carrier on which the little dragon sat, popped open.  The dragon squawked unhappily, but climbed down into the carrier, then tried to bite the girl as she reached down to close the door.

“No more lessons today, Pet,” said Zurfina.  “I’m going to take a nap.  Put our boy away and then practice your magic.”

The girl picked up the animal carrier and began lugging it forward.  Zurfina smiled at Zeah and winked.  He half expected her to raise her arms above her head and disappear, but she didn’t.  She just followed the child carrying the dragon, and all three passed through an open hatch and out of eyesight.  Zeah ate several bites of his porridge; just enough to have something on his stomach, then poured the rest over the side and tossed his bread in the ocean after it. Then he walked back to the stern to return his bowl.