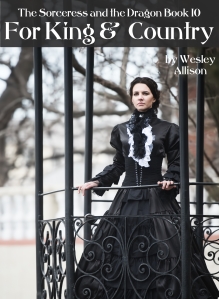 On almost the exact opposite side of the world from Birmisia Colony was the mother country of Greater Brechalon and its capital Brech City.  Its heart was the Old City, filled with majestic buildings that were only slightly less grand than the palaces dotted among them.  Many of these great buildings, all originally homes of the rich and powerful, had been subdivided into apartments, and places of business.  The house at Number One, Avenue Dragon, four stories tall and occupying a full city block, was still intact, though it had been modernized with gas lights, indoor plumbing, and even an elevator.  It was the Dechantagne house in Brech City, though the sole member of the family occupying it at present was Iolanthe’s daughter, twenty-four-year-old Iolana Staff.

It was well past midnight, but Iolana found herself unable to sleep.  She stared across her bedroom at the evening post, sitting upon its silver tray, on the mantle above the cold fireplace.  With a sigh, she stood up, slipped her feet into her house slippers, and threw a robe over her already voluminous nightdress.  Then she stepped across the room to the fireplace.  She brushed aside half a dozen letters and picked up a large envelope.

Leaving her rooms, she followed the corridor all the way to the back of the house.  It seemed like miles away and in reality, was almost the length of a football pitch, but at last she reached the correct door.  She knocked quietly and then entered, closing the door behind her.

Birmisia Colony was thick with lizzies, but in Brech City, or for that matter the country of Greater Brechalon, or for that matter the entire continent of Sumir, the population of lizzies was limited to one individual.  At that moment, that one lizzie was sleeping in the bedroom Iolana had entered, the great toothy mouth wide open and an open book hanging from one clawed hand.  The lizzie in question was Esther, whom Iolana had raised from a baby, and who consequently seemed far more human than lizzie, at least when awake.

Esther started and blinked when Iolana sat on the bed beside her.

“You’ve gone to sleep while reading again.”  Iolana took the book out of her hand, closed it and looked at the cover.  “You’re behind.  I gave you this two days ago.”

“I’m sorry.  I have fallen behind.  I was out late last night with Willa, so I didn’t get a chance to do my nightly reading.”

“Where did you go?” wondered Iolana.

“We went to a very interesting pub, where a woman was singing while playing something called an accordion.”

“I thought it was lovely,” said Esther.

“You could take your friend to the opera.  She might appreciate having her musical experience expanded.  I doubt that, as a maid, she gets asked to go very often.”

“You didn’t wake me up just to show me how toploftical you are, did you?”

“I couldn’t sleep, and I needed my sister,” said Iolana, sticking out her lower lip.

“Something has your nerves shattered if you’re calling me your sister.  I was always under the impression that I was your favorite pet.”

“You know I’ve never thought of you that way.”

Esther slid over to the other side of the bed and held the blankets up.  Iolana climbed in beside her and snuggled up into the lizzie’s shoulder.  They were quiet for several minutes.

“I have a wonderful life here in the capital.  Everyone respects me.  My book is bringing in enough money that I haven’t touched my allowance in months.  I’m an associate professor of literature.  In another five years, I could be the youngest full professor in the history of University of Brechalon.  You are my closest family, and you’re here.  When Terra gets back from her trip, she’ll be less than a hundred miles away, just a few hours by train.  I have everything I want right here.”

“Then why are you awake in the middle of the night?” wondered Esther.

Iolana was quiet for a moment.  Then she handed Esther the envelope.  It had previously been opened, so the lizzie easily removed the official looking letter inside.  Unfolding it, she held it up to the light.

“They’re offering you a full professorship at University of Birmisia.”

“You would be head of the literature department and…”

“And you would be on track to become University President.  That’s quite something.”

“Yes, but it’s probably all my mother’s doing.  She probably wants me closer so she can control every aspect of my life.”

“Do you think so?  She never seemed to pay all that much attention to you before, except when you went out of your way to provoke her.  I would have thought that she would just as soon have you here, far away from her.  Maybe it was Augie.  He’s practically paying for that school out of his own pocket.  At least that’s what I hear.”

“Didn’t you say that confusing book you wrote would have every institute of learning sending offers?”

“Yes.  Odyssey has been well received.”

“And have you gotten other offers?”