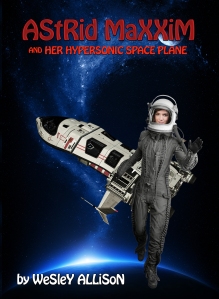 Astrid led the group away from the public area to one of the hangers. Using a key card, she let them in the side door of a large aircraft hanger. With a flip of a nearby switch, powerful lights suspended from the very high ceiling illuminated the entire building. Sitting in the center was the most remarkable aircraft they had ever seen—Astrid’s space plane. It was shaped something like a short arrow with a large arrowhead. The pointed nose arched back to a wide cabin. Then the fuselage narrowed, only to widen a bit in the back to contain powerful rocket engines, which had not yet been installed. Just in front of where those engines would be located, was a small wing on either side. In addition to a very large window in front of the cockpit, there were two large windows on either side of the craft.

“It’s not as pointy as I expected it to be,” said Valerie.

“And I thought it would be black, like a stealth fighter,” said Austin, “or maybe silver. This is beige.”

“It’s called ‘simply white’,” said Astrid, with a frown. “The astridium coating could have been made in any color. I chose this because it’s the same color as my first computer. I was feeling kind of nostalgic. The astridium, which covers a cooled nickel-titanium skin, is also why it doesn’t have to be quite so angular. It also allows for larger windows, since they are made from the same transparent astridium I used in my undersea dome, thicker though. I think she’s beautiful.”

“It will be supersonic though, right?” asked Toby.

“Hypersonic,” said Astrid. “She should be able to make mach-6 in the upper atmosphere.”

“How fast is that?” asked Austin.

“Can you fly it to the moon?” asked Regular Valerie.

“No,” said Astrid, “but she will fly much higher than the NASA space shuttles ever did. She’ll be able to reach geostationary orbit to repair telecommunications satellites for instance. That’s an altitude of 22,236 miles above sea level.”

“Can we go inside?” wondered Austin.

Astrid led them to the far side of the spacecraft where a set of steps led up to an open hatch. The interior was divided into a cockpit and an aft cabin. The former contained the flight instrumentation and seats for five crewmen. The latter, despite containing four workstations for mechanical and scientific work, was very spacious.

“The normal crew compliment is five,” said Astrid. “They would all be up front during takeoff and landing. Back here is the work and living area.”

“I don’t see any beds or a toilet,” said Denise.

“There is a zero gravity waste disposal system in the back. In space though, you don’t really need beds. The crew will sleep in sleeping bags that Velcro to the ceiling and walls.”

“So when are you going to fly it?” asked Robot Valerie.

“We’ll be installing the engines next week,” said Astrid. “Then comes the ground test. The atmospheric test flights should begin before the end of the year. But it won’t be me flying. I don’t even have a pilot’s license.”

“You should get yours,” said Christopher. “The governor would give you special permission like he did Toby and me, so not being sixteen yet won’t be a problem.”

“Besides,” said Toby. “I’ve seen you fly several times now and you’re better than any of us.”

“I’ll think about it,” replied the girl inventor. “In any case, it will be a trained test pilot taking her up for the first time.”

“Why do you keep calling it ‘she’ and ‘her’?” wondered Regular Valerie.

“It’s kind of traditional for ships and spacecraft to have a female pronoun.”

“Well, does she have a name?” asked Denise.

“Sure.” Astrid smiled. “I kind of have a fantasy about building a fleet of ten space planes, so I have ten names. The first one… this one… she’s Ariel.”

“You didn’t name them all after Disney princesses did you?” asked Austin.