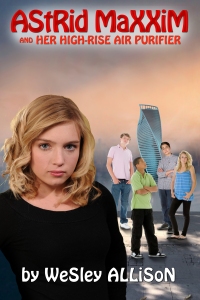 Astrid Maxxim stepped up to the counter in the Maxxim City Police Station.  The officer, who had been busy writing, looked up.

“I’m here to meet my friend Valerie Diaz.  She’s writing a report on the police department for school.”

“Right.  She’s with Chief Gillespie.  He said to bring you on back when you got here.”

Stepping out from behind the counter, he waved for her to follow and led her back down a hallway to a door.  He knocked once and then opened it for her to step inside.  The room beyond was a small one, unremarkable except for a large window filling up one wall, and a camera on a tripod pointed at it.  Standing there, looking through the window, which Astrid surmised was a two-way mirror, were the Chief of Police and her friends Valerie Diaz and Valerie’s cybernetic twin Robot Valerie.

Astrid Maxxim was a cute girl of fifteen.  Her shoulder-length strawberry blond hair set off her very large blue eyes.  Valerie Diaz had been Astrid’s friend for years.  She had a crewcut of black hair, as well as flashing brown eyes.  Robot Valerie was the result of one of Astrid’s experiments a year before.  She had a metallic blue polycarbonate skin and long blue hair but was otherwise very similar to Regular Valerie.

Astrid stepped over next to her to peer into another room where a female police officer and a man in dirty clothes faced each other over a small table.  Astrid knew Officer Cutler.  The policewoman had helped write the safety rules for Astrid’s hoverbike.  The man across from her, despite his clothes, had very clean hands and face.  He was bald, with a bit of a scraggly beard.

“So, let me make sure I have everything,” said Officer Cutler to the man.  “Your name is Thomas Eckles, and you’re from the future”

“But you lost your time machine.”

“Then you came here to Maxxim City.  Why was that again?”

“To get another time machine.  They invented it here.  I mean, they’re going to invent it here—any day now.”

“Are you working on a time machine now?” Chief Gillespie asked Astrid.

“Of course not,” said Astrid.  “Time travel is impossible.”

“If you say so, but I’m standing here next to a robot.”

“Well, it’s good to know that Maxxim City is still here in the future,” Officer Cutler told the man.

“Come on, let’s get you girls on your way,” said the Chief, waving them toward the door.

“You’re going to get a psych evaluation at the hospital,” said Cutler, from the other room.  “If they say you’re not a threat, you’ll be free to go.”

“I understand,” replied Eckles, if that was really his name.  “I’m not worried.  This is before things got bad.  If this were my time, they’d throw me in the reeducation booth.”

“Wait.  What did he say?” asked Astrid, who had just stepped out into the hallway.

“Just more gibberish,” said Gillespie, closing the door after them.  “Let this be a lesson to you girls—don’t do drugs.”

“We wouldn’t do that,” said Robot Valerie.

“Um, I wasn’t really worried about you,” he clarified.

“The future is always dystopian, isn’t it?” asked Cutler, still in the interview room.

“It’s because of the Internet,” replied the so-called time traveler.  “Once someone controls all the information, robot stormtroopers are sure to follow.”

Astrid looked back through the mirrored window.

“I think I want to hear more.”

“Don’t get too invested,” said the chief, guiding her by the shoulders out of the room.  “There are a lot of crazy people in the world.”  He looked at the Valeries.  “I hope you were both able to get all the information you needed.  We’re a small-town police department, but we’re proud of the job we do.”

“I think we did,” said Regular Valerie.  “Thanks so much for taking the time to give us the tour.”

The chief led them to the lobby and then, bidding them farewell, turned and marched back toward his office.

“That was really fascinating,” said Robot Valerie.  “I think I might want to go into law enforcement someday.”

“I like your new shoes, Astrid,” said Regular Valerie looking down, “but if you don’t keep them tied, you might fall on your face.”

She dropped down into a squat to tie it.

Astrid turned to see that Officer Cutler had led the man calling himself Thomas Eckles, his hands cuffed behind his back, into the lobby.  Now he was staring at Valerie.  Astrid stood up.  Eckle’s eyes turned to her and suddenly his face drained of color.

“Johnson!” called Officer Cutler, to the other officer on duty, who ran around from behind the desk.  They each took one of the man’s arms and lifted him up, pulling him back down the hallway.  “You girls go on out,” she said.

As the two police officers half carried/half dragged the man away, Astrid could hear him shouting.  “No!  Don’t you understand?  We’re all dead!  Nobody crosses the Supreme Ruler and lives!”

“I hope they get him the help he needs,” said Robot Valerie, once they were outside the station’s front door.

“Unless he’s really from the future,” said Regular Valerie, “in which case, I hope he gets another time machine.  I guess you better hurry up and invent it, Astrid.”

“Time machines are not possible,” said Astrid, with a frown.

“Just because nobody’s made one before, doesn’t make it impossible that they might someday,” said Valerie.  “Nobody thought a rocket to the moon was possible, but they built one.”

“That was theoretical,” Astrid replied, “under very confined parameters, and only at the quantum level.  Why does nobody seem to get that?”“Because nobody knows what any of that means,” said Regular Valerie.