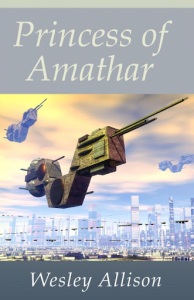 In many ways, life aboard the great Amatharian battlecruiser was much easier for me than it had been in the city. The ship operated on a fixed schedule based on its own version of the city-cycle, which was recalibrated each time the ship docked in Amathar. Each person on board was assigned a duty and worked three cycles, followed by six cycles off duty. I knew absolutely nothing about the ship or its procedures, so initially I was assigned to the security detail. Since I was a knight, I was given what was essentially an officer’s rank— command of ten swordsmen, who each commanded eight to ten warriors.

Amatharian ships didn’t have names, though they did sport numbers. The battlecruisers were essentially all of the same class, though they had minor differences, and some were newer than others. Their importance was based entirely upon who commanded them, and what mission they were on. This ship was Sun Battlecruiser 11, and it was the flagship of Norar Remontar’s twelve-ship squadron, one of four squadrons making the assault on Zonamis. Like the other ships, this one was painted navy blue with silver trim. Like the other three flagships of the fleet, this one had a great crest across the bow— in this case, a flaming sun with outstretched wings. And like all Amatharian ships, this one was arrayed with the banners of her knights. When I first saw my own banner, with a flaming sun embossed by the letter A, flying among the many others, I was filled with pride. There were more than ten thousand soldiers aboard this one ship, and about one in a hundred were knights.

The accommodations on the vessel were far more spacious than I had expected. Every soldier aboard had his own cabin, and though they were very small in comparison to their homes in Amathar, they were far larger than I had seen on any ocean going vessels of Earth. Each was large enough to have a bunk, which was mounted to the wall rather than sunk into the floor, as was the Amatharian fashion, a small table and two chairs and a closet. My own cabin had a large window looking out toward the landscape that rolled continuously past.

Now that we were finally on our way, I spent more and more time thinking of the woman I knew I was in love with, though I had seen her only one time— the Princess of Amathar. Sometimes these thoughts would lead to remembrances of her cousin, Vena Remontar, and the friendship she had shown me. Other times I just fretted over what might have happened to Noriandara Remontar since her abduction by the Zoasians. Even cruising at full speed, it would be a long time before we reached Zonamis, and I worried about all the things that she still might face. I figured our maximum speed to be between two and three hundred miles per hour, and so even accepting the more generous of the two figures, it would be the equivalent of four and a half months before the fleet arrived. It was a long time.

I tried to make good use of all the time I had available. I learned to pilot the Amatharian aircraft, both fighters and shuttles. It wasn’t as difficult as one might expect. I imagine that any child capable of playing those fast action video games could easily manage it. The controls consisted of a joystick in the left hand to control the steering and a lever for the right hand that controlled lift. There was an automated training simulator on board which I used at first, but after it became apparent to me and to the pilots that I would probably not crash the vehicle, I was allowed to participate in some of the flight drills, which were constantly leaving the battlecruiser and returning.

I improved upon my growing skill with the sword, which was in fact my primary duty aboard ship. As the leader of a security team, I did little but see to the watches around the vessel, and drill my troops with the sword and the light rifle. I must say that I had never seen men and women so devoted to duty as those one hundred or so Amatharians under my command. In that entire time, never once was a soldier absent from his duty because of sickness or anything else.

Even with all of the military activity in which I was involved, there was plenty of time for recreation and social activity. The swordsmen and warriors of my company enjoyed playing a kind of catch, in which they used an irregular shaped cloth bag filled with plastic-like beads. Another game involved the skewering of various thrown objects upon a stick as the individual ran through a maze of obstacles. I gathered that this traditional activity once involved the use of swords, but now it was considered a great dishonor to endanger one’s sword for a mere game. In addition, I spent a large amount of time in the ship’s prodigious library where I read biographies of interesting Amatharians, novels of several different types, and a book of rather dark and morbid poems penned by Mindana Remontar herself.