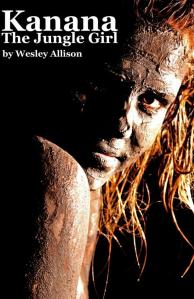 We stood on the deck of the S.S. Louisa May and watched the coastline roll gently past.  Beyond the flawless stretch of white sand overhanging with coconut trees was a thick growth of jungle brush and more exotic trees stretching up for the sky—big leaf mahogany trees, Brazil nut trees, giant kapoks, and massive capironas.  Wisps of morning mist still hung in the air, undisturbed by any breeze.  Buzzing through these vapors like airplanes dodging through the clouds were six-inch dragonflies.  Except for the low chugging of the ship’s engine, there was no sound, until the air was suddenly rent by a deep throaty roar of some unknown creature inside that dark and haunting primeval forest.  Colonel Roosevelt clapped a hand on my shoulder.

“What do you think, my boy, of your first close-up view of a new world?”

I looked at him and said something, I no longer remember what, but I turned immediately back to the emerald panorama gliding swiftly by.  It had been a horrible series of events that had conspired to bring me to this distant spot, early this Monday morning April seventh, the year of our Lord 1913.

I had fully expected that by my thirty-third year, that halfway point in a man’s life, I would be settled down with a pretty wife and two or three above average children.  But providence did not see fit to make this easy for me.  Becoming a man in the height of battle on the slopes of Kettle Hill created a burning desire for adventure in my heart that the brief conflict with the Empire of Spain failed to quench.  I traveled to South America and saw much of that land, and then to Africa and even to Southeast Asia.  I then spent five years in Europe, working for my keep as I toured the ancient lands of Greece and Rome and their successors.  When I at last found my way back to the good old US of A, I was more than ready to settle down, to find that pretty wife, and to start that family. Luck was with me.  I found a new job and a beautiful girl.  For two years everything went my way.  Then it all fell apart.

“Henry… Henry.”  The hand on my shoulder shook me back to the present.

“I was just saying that we should go aft and enjoy a cup of coffee.”

I turned and followed him down the length of the ship.  “I wanted to say Colonel, that I voted for you in November.”

“I had no doubt.”  He grinned.  “A good many people did, but the electorate has spoken.  That is not to say that I might not make a similar run sometime in the future.  I am still fit as a bull moose.”

“Indeed sir, you are the youngest former President that I have ever heard of.”

“The secret to youth is a vigorous life.  I have no need to tell you that.  Look at you. You are a strapping man of heroic proportions.  Why, I recall you as a rather scrawny boy when I think back to our days in Cuba. Private Henry Goode—no, he did not look at all promising.”

“I can’t believe that you remembered me at all,” I said, thinking back to three weeks before, when I booked passage on the Louisa May in San Francisco.

“I remember all the men of our volunteer regiment,” he replied sincerely, “and a good number of the Tenth’s Buffalo Soldiers as well.  There is a bond forged in such situations that is not easily to be set aside.”

A steward handed each of us a cup of coffee and we sat down in a couple of sturdy folding chairs.  My eyes again sought the rainforest moving smoothly past us.  Roosevelt leaned over, bringing my attention back to him.

“It is quite an interesting coincidence that we both find ourselves on the same vessel sailing into foreign waters.”  I started to protest, but he held up his hand.  “I take you at your word that you didn’t know I was aboard, despite the fact that Kermit and I have hardly been secretive in our planning. No, what I want to know is why, if you are not planning on joining our quest, are you are on your way to Elizagaea.”