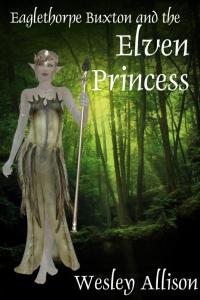 It was 2009 and His Robot Girlfriend was being dowloaded by the tens of thousands. I had just finished editing The Voyage of the Minotaur and was entering it into the Amazon Breakthrough Novel Contest. (It made it to round two.) So what to write next?

I wanted to do something short and fun and I decided on a fantasy comedy. I had read and enjoyed Lemony Snicket’s Series of Unfortunate Events, particularly the character of Lemony Snicket who is narrator and somehow involved with the characters and frequently hints at things outsidet the story. I decided that my hero would be a story-teller who changed the story to suit himself. Eaglethorpe Buxton was born.

I set the story in (sort of) the world I had created for my D&D campaign. My kids still have fond memories of some of the settings in which the stories take place and even met some of the characters when they played– notably Queen Elleena of Aerithraine. I had a lot of fun writing EBEP and many people have written to tell me that they like him. I’ve heard a few negative comments too, but that’s okay.

The book is very short and was always intended as a freebie, but there are a very few paperback copies around.