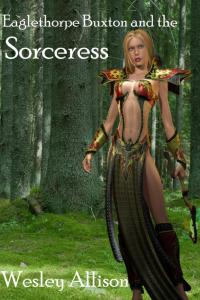 I had finished Eaglethorpe Buxton and the Elven Princess and had a lot of fun writing it. I was still busily trying to find a publisher for Senta and the Steel Dragon, so I decided to spend my free time writing a second Eaglethorpe book.

A few years ealier, I had written a little play, which was performed by the Brown Junior High Drama Club to great success, and I decided that this play had been written by Eaglethorpe. The play involves characters from his world– specifically the parents of the Queen of Aerithraine, so it fit.  Incidentally, there were two showings of this play, which went really well, and I taped one of them using a big old VHS camcorder.  About two years later, my wife taped over it.  I don’t remember what show she taped now.

I was watching lots of Shakespeare at the time I was writing Eaglethorpe and you will see a lot of not so subtle nods to the Bard. The third part of Eaglethorpe (which is  in The Many Adventures of Eaglethorpe Buxton) is really a continuation of the story in Sorceress.

Another bit of trivia: In the old D&D game that I played with my kids many years ago, Myolaena, the sorceress in this story, had a sister– Zurfina, whom you’ll recognize from Senta and the Steel Dragon.