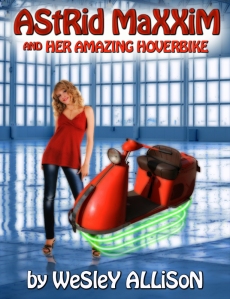 I think of this book as marking the beginning of my intermediate period.  One day I was standing in my living room looking at the row of yellow spines on my collection of Tom Swift Jr. books.

In the summer of 1969, I discovered Tom Swift Jr. among the possessions of my Uncle George, who had died the year before in Viet Nam. I started reading them and was hooked. I was hooked on Tom Swift, on science fiction, and on reading.

My first book, Princess of Amathar had been an homage to the Edgar Rice Burroughs books I had loved in my teens.  So that day, looking at Tom Swift, I thought, “that’s the type of book I should write next.” I wanted to capture the same feeling of excitement and innocence that I found when I read Tom Swift Jr., but I wanted to update the stories and make them my own. I sat down and created the setting and the characters, and made a list of inventions that stories could be built around.

There were two things that I always had trouble with, as a reader of Tom Swift. First, time never passed. Tom was always 18. The second, his inventions never seemed to change the world, no matter how innovative and revolutionary they were. I decided that Astrid’s inventions would change the world and she would age as the series progressed.  So far I’ve written six Astrid Maxxim books and have plans for as many as fifty.  I’d like to write at least one per year, but so far, I haven’t been.