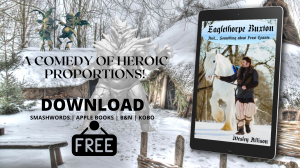 Chapter Seventeen: Wherein I learn whither is the piesmith, and Elleena too.

It was true.  My own little Ethylthorpe had not only usurped my identity, which is to say pretended to be me, but she was dressed even more like a boy than ever before.  She had on breeches and a shirt and a leather jerkin.  I grabbed her by the ear and pulled her from the room, shoving her into an alcove near the bottom of the stairs.  Edna followed me in and the three of us stood there looking at one another in silence for sixty seconds, which is to say one very long minute.

“Well, you messed up, didn’t you!” Ethyl hissed at Edna.

“I mean you couldn’t even fool this great idiot!”

“I suppose you had mother completely fooled,” demanded Edna.

“I guess I did.  She didn’t say anything.  I asked her if I could cut my hair and dress like a boy, and she was fine with it.  She wasn’t really paying much attention.”

“What I told you was true… after a fashion.”

“Where is your mother, anyway?” I questioned.

“She has gone after the frost giants,” said Ethyl.

“What do you mean, she has gone after the frost giants?”

“I mean, the frost giants went.  And she went after them.”

“Why what?” asked Ethyl.

“Why did Mother go after the frost giants?”

“When they attacked the village the other night, some of them captured the giant woman and took her north with them?”

“Not the piesmith!” I cried.

“Indeed, she was the very one.  Mother went to rescue her.”

“Now I must go and see that the piesmith returns safe, and your mother too, else I shall have to tell my poor daughters that they are motherless.”

“You’ve been telling me that for years,” quoth Ethyl.  “I will go with you.  It will be a great adventure.”

“Well, I don’t want to go,” said Edna.  “I’ve been dragged along on all her adventures and I’m just tired of it. Ethyl, step aside and talk to me for a moment.”

The two girls huddled together in close talk.  After about two minutes, they gave each other a nod, and returned to my side.

“We will both stay here,” said Edna.

“I will make sure that Edna is safe,” said Ethyl, sticking out her chest, heroically.

“Very well,” said I.  “Your mother has a two-day head start, so it will probably be seven or eight days before I return.”

“My room is paid up for a fortnight,” said Ethyl.  “If we need more money, I can tell stories in the taproom.”

“Very well,” said Ethyl, thoughtfully.  “I am already working on a new story: Eaglethorpe Buxton and how he was torn to pieces by frost giants and consequently left two poor, pathetic orphans to fend for themselves.”